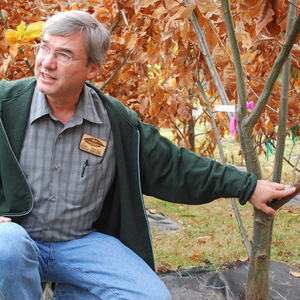 Dr. William A. Powell received his BS in biology in 1982 at Salisbury University, MD, and his PhD in 1986 at Utah State University studying the molecular mechanisms of hypovirulence in the chestnut blight fungus, Cryphonectria parasitica. He spent over two years as a postdoctoral associate at University of Florida researching transformation techniques using the fungal pathogen, Fusarium oxysporum. In 1989 he became a faculty member at the State University of New York’s College of Environmental Science and Forestry at Syracuse, NY, where he began collaborating with his colleague, Dr. Charles Maynard, developing methods to transform American chestnut (Castanea dentata) and testing resistance enhancing genes, culminating in a blight-tolerant American chestnut tree. He has also worked with American elm and hybrid poplar. Dr. Powell currently has over 60 peer reviewed publications and one patent. He teaches courses in Principles of Genetics, Plant Biotechnology, How to Present Research to the Public.